Joan welcomed everyone to our monthly Zoom Meeting.   A guest, Amy G., was welcomed.   For tonight, our program was first, followed by our 'business' portion of the meeting.

Our program for this meeting was a Zoom call and lecture with Catherine Jordan.   Catherine is a renowned teacher and designer as well as being an EGA member herself.  She narrated her powerpoint explaining the design and stitching process of her pieces.   She focused on her painted maps.   Her maps are stitched first, then painted.  provide a free Rose Compass chart to everyone which was emailed to members prior to the meeting. See the article on Catherine Jordan in NeedleArts, September 2009 - Catherine Jordan

Catherine's first map was created for the 400th anniversary of the Jamestown Settlement in Virginia.  It includes part of the Chesapeake Bay and coastal Virginia.    Once charted and stitched, it resembled a pen and ink drawing and Catherine felt is looked too bland.  She experimented by adding blue paint along the backstitched shoreline drawing the paint away from the stitching.   She later experimented with using brown paint to accentuate shorelines, mountains, etc. 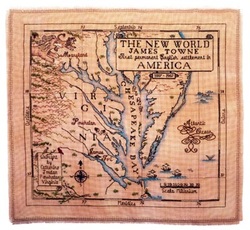 For her maps, she uses Jacquard Textile Acrylic paint and a 1/4 inch flat brush.  The paints mix with water and because they are specifically made for textiles, they do not leave the fabric stiff when they dry.  She uses a micron pen to draw the shorelines before doing a backstitch or double running stitch for the outline.   When painting, by drawing the brush away from the stitch line, the saturation of color lessens the further away from the shoreline, giving a wonderful effect.  The linen needs to lie flat until paint is completely dry.  The paint then has to be heat set with an iron.   She keeps a journal of things she finds interesting that she may be able to incorporate in future maps.  She also used symbols from our US currency in her maps.   For most of her maps, she creates a companion needle book which measure 3 inches by 4 inches.

Before doing each map, she does research.   Motifs are added to each map but only if they are correct for the time period of the map.  For instance, the map of Jamestown was as Jamestown was at the time.  She uses the "golden rectangle" which is a design tool to give visual interest, to decide where motifs will be placed.  See this link for a video of her works.

Her second map was of Texas and she experimented with using even more color.  Arbutus Cunningham created a series of CD's, The Texas Series, which feature Catherine's map of Texas as their cover. 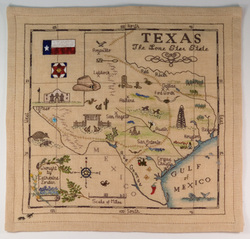 Some of her other maps include - 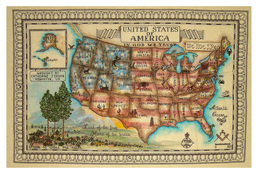 What lovely designs and  a great presentation.  Visit Catherine's website at  www.CatherinesDesigns.net for more of her designs.

Posted by Lamplighters EGA at 6:48 PM

Lamplighters EGA
The mission of The Embroiderers’ Guild of America is to inspire passion for the needle arts through education and the celebration of its heritage.

For more information about this local EGA Chapter or to join this chapter, please contact us at LamplightersEGA@gmail.com
For information on classes, lectures, seminars, Chapters in your area and at a national level visit Embroiderers Guild of America at EGAUSA.org